The worst show on TV 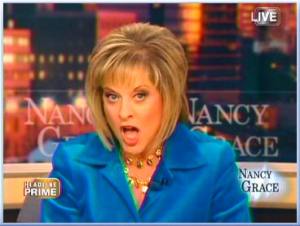 What is the worst show on TV?  Without question, Nancy Grace.  Even with hundreds of channels to choose from and endless hours to fill, no show stands up to Nancy.  This awful, awful excuse for a human being should be banned from television.  Anything that would shut her up would be welcome.  Not only does Nancy berate her guests, she attacks and dresses down her own correspondents.  She behaves like a petulant child, cutting off the mic of anyone who strongly disagrees with her.

Nancy’s track record is questionable as well.  She has been repeatedly accused of prosecutorial misconduct and was even cited by the Georgia Supreme Court for “inappropriate and illegal conduct in the course of a trial”.  She has been implicated in the suicide of Melinda Duckett.  She tried and convicted the Duke lacrosse players of gang rape on national TV only to have them found innocent and the prosecutor in the case disbarred.  She plagiarized in her book.  The list vile half-truths and mistakes that have flowed from her lips is far to long to list.

Nancy Grace represents all that is wrong with our country.  It doesn’t matter if you are conservative or liberal, republican or democrat, christian, jewish or muslim.  Every person should detest her excuse for journalism.  It’s not journalism.  It’s not even entertainment.  Even calling it trash is to good of  a term for what Nancy puts this country through.

Just do the right thing, turn off the channel.  Refuse to watch her.  If you feel the need to do more, write the companies that advertise on her show and tell them you will no longer use their products and services so long as they advertise with Nancy.  Lets do all of us a favor and refuse to wallow in muck with Nancy.

And to Nancy Grace herself, we give the bad nut of the day.

One response to “The worst show on TV”